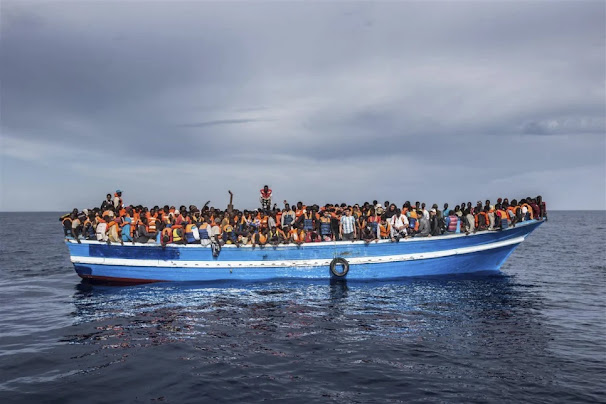 In much of Europe, government policies and public attitudes towards immigration - mainly from Africa and the Middle East – have hardened over recent years.

“The European Union’s borders continue to be a site for the punishment and weaponization of people trying to find a better life.”, writes Kenyan political analyst Nanjala Nyabola. … [M]ainstream politics across the region has made room for the far right to shape narratives around migration, particularly migration from the Global South. … The border crisis in Europe is a moral crisis. A region which positions itself as a worldwide moral arbiter has demonstrated that its moral imagination cannot extend to the safe movement of people who come through its borders.”
- Nanjala Nyabola. “Migration: Europe’s Achilles’ heel”. Oxford, UK: New Internationalist, February 15, 2022.
https://newint.org/features/2022/02/07/view-africa-europe-migration

In the April 24 presidential election in France, centrist incumbent Emmanuel Macron easily defeated extreme-right challenger Marine Le Pen by 17 percentage points. Le Pen, however, increased her share of the electorate by 7.6 points since the 2017 elections, gaining 41.5 percent of the vote.

While softening her signature anti-immigrant rhetoric, Le Pen maintained white nationalist and restrictionist positions on immigration, including calling for asylum seekers to be processed abroad (in an echo of Trump’s "Migrant Protection Protocols"). However, she also campaigned on some left-leaning economic and social policies, in contrast to Macron’s unpopular weakening of labor protections and proposal to raise the retirement age.

“This election has further scrambled the traditional divide between left and right in France,” according to Rachel Donadio of The Atlantic magazine. “Ms. Le Pen has managed to widen her consensus by combining far-right positions on immigration with a left-leaning defense of public spending and social welfare.”
- Rachel Donadio. “Marine Le Pen has already won”. New York Times, April 24, 2022.
https://www.nytimes.com/2022/04/22/opinion/emmanuel-macron-marine-le-pen.html

Algeria’s war of independence from France, which ended in 1962 after more than 130 years of colonization, continues to haunt France’s debates on immigration and national identity.

“Grim conspiracy theories about replacing white, Christian French with Muslims from North Africa. Vows to limit immigration from the region. And the evocation of memories of a supposedly glorious colonial past in Algeria. … [T]he long shadows of that past … have increasingly pervaded the campaigns of right-wing candidates in next month’s presidential elections.”
- Constant Méheut. “Shadows of Algerian War Loom Over Election Campaign in France”. New York Times, March 19, 2022.
https://www.nytimes.com/2022/03/19/world/europe/france-algeria-macron-election-far-right.html

A sudden influx of over five million Ukrainian war refugees into countries of eastern and central Europe has mostly been welcomed with outpourings of generosity. However, the contrast with the cold shoulder offered in some cases to African and Middle Eastern refugees has incited accusations of racism.
- Nadine White. “UN admits refugees have faced racism at Ukraine borders”. London: The Independent, March 1, 2022.
https://www.independent.co.uk/world/ukraine-racism-refugees-russia-war-un-b2025771.html

Ian Urbina. “The Secretive Prisons That Keep Migrants Out of Europe”. The New Yorker, November 11, 2021.
https://newyorker.com/magazine/2021/12/06/the-secretive-libyan-prisons-that-keep-migrants-out-of-europe

No Queda de Otra: An Exploration of the Root Causes of Forced Migration to the Southern Border

No queda de otra (There is no other way) is a report based on interviews with 51 mainly Mexican and Central American immigrants in Ciudad Juárez, Mexico, the border city across from El Paso, Texas. They asked: “What led you to leave your home?”. It also inquired about experiences with immigration enforcement. “The answers revealed a confluence of natural and human-made disasters, economic structures that impoverish and state failure to protect people experiencing both generalized and gender-based violence.” Their research also found that “climate change and the impact of the COVID-19 pandemic are accelerating the underlying drivers of forced migration from Central America and Mexico”. The report includes recommendations to the Biden administration on root causes of migration, better legal pathways, the journey through Mexico, and access to asylum.

“The Hope Border Institute (HOPE) brings the perspective of Catholic social teaching to bear on the realities unique to our US-Mexico border region. Through a robust program of research and policy work, leadership development and action, we work to build justice and deepen solidarity across the borderlands.”

Peter Costantini
Independent analyst based in Seattle and Migration Coordinator of Americas Program. Over four decades, he has published work on topics including migration, Latin America, labor, housing and economics, reporting from Nicaragua, Honduras, Mexico, Haiti, Italy, Ireland, China, and the U.S. southwest border. Besides Americas Program, his work has appeared in Inter Press Service, Foreign Policy In Focus, MSNBC News, and many other publications, in English, Spanish and French. For his first twenty years in the workforce, he made his living doing blue-collar work, primarily in construction, shipyards and office-equipment repair, and was active in a union for several years. He also volunteered a second shift as a community organizer. After co-founding the Seattle Tenants Union, he served on the executive board of the National Tenants Union. He was involved in Central America solidarity in the 1980s and 1990s, and served as a technical volunteer in Nicaragua. For his last twenty years of gainful employment, he worked in technical positions in the software industry. He is now retired and embedded as a volunteer with the immigration justice movement.